The Frank Sidebottom Bronze Statue unveiling date is getting closer, and plans are underway to make the unveiling unusual and memorable.

So Sunday 20th October 11.37 Timperley Village is going to be the place to be! Please do not forget that you can still donate to the Statue fund, with all monies left over going to Marie Curie. We plan on giving them a cheque on the day.

Martin O'Neill:
I photographed The Freshies on February 28th, 1979, when they played Bowdon Vale Youth Club, on the same stage that I shot Joy Division two weeks later. Being a fresh-faced young news photographer I decided I'd do my bit to make these guys FAMOUS, so Chris and I, and two of the other lads spent a pleasant afternoon that early Spring wandering around the centre of Sale having fun! We went in the local Wimpy bar, we ran up and down the spiral Tesco car-park ramp, I had them 'pretend' to get thrown out of the Mecca Embassy Rooms, and then I stood them in the middle of Sibson Road .. all signs pointing to Timperley! However, as with my Joy Division photographs, nobody took a blind bit of notice .. and the negatives have stayed filed away, waiting for their moment! 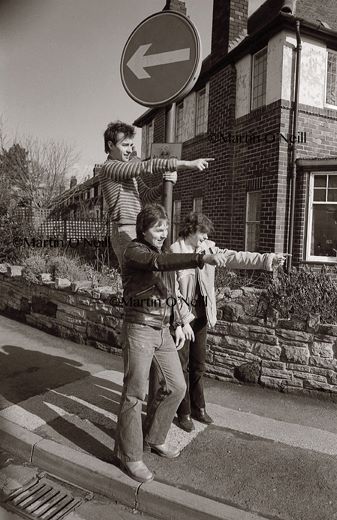